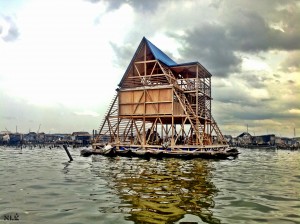 Sea level rise has been getting some serious press lately, particularly after super storm Sandy hit New York last year. Designers all over the world are weighing in with ideas for adaptation.

I’ve been working with the Portland Society for Architecture and SPACE Gallery to put together an exhibition at SPACE Gallery running November 1 through December 31, 2013. Waterfront Visions: 2050 is a symposium and exhibition exploring sea level rise on Portland’s waterfront.  The symposium, held November 7 at Portland’s Ocean Gateway Terminal, will feature presentations by sea level rise experts in finance, policy, science and planning. A roundtable discussion and charrette will be held the following morning, Friday November 8 at SPACE Gallery. Results of the roundtable/charrette will be integrated into the exhibit at SPACE.

The exhibition will feature examples of adaptation, fortification, and retreat both locally and around the globe. Exhibit materials include work by Jessica Wagner Kimball of Sasaki, Susannah Drake of Dland Studio, and Brian Healy of Perkins + Will.

We are very pleased to be involved in this significant and timely exhibition. We hope you will join the PSA in exploring and developing strategies for sea level rise adaptation.